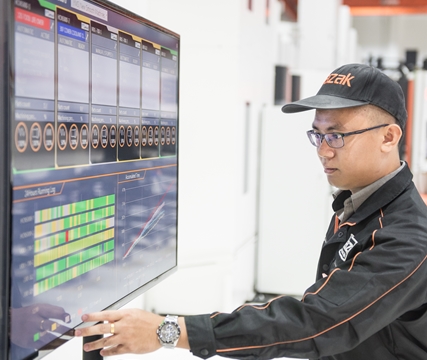 One of the key thrusts of the Precision Engineering Industry Transformation Map released in October 2016 was to groom a pool of digital champions to automate their factory operations. Machine tool manufacturer, Yamazaki Mazak Singapore (YMS) is one of them.

The 25-year-old unionised company has built capabilities and expanded into advanced digital manufacturing. With funding from the Singapore Economic Development Board (EDB), the Mazak iSMART FactoryTM opened its doors in June 2017. It was first piloted at North America’s Mazak Corporation in 2014, followed by Japan’s Oguchi plant in 2015 with improved technologies and concepts.

Mazak iSMART FactoryTM was built based on accumulated knowledge in automation technology and know-how on factory management. By embracing the latest Internet of Things technology, the iSMART FactoryTM represents further advancement in manufacturing technology.

According to Research & Development General Manager James Ting, while automation and artificial intelligence is not new to the company, the Mazak iSMART FactoryTM adds a layer of connectivity between devices which allows real-time communication between the office and factory.

For example, instead of manual recording, engineers can now scan their employee barcodes at the start and end of each assignment to capture the time taken for individual processes.

Mr Ting shared: “We can collect and analyse data from all sources, including humans themselves. While we are still at the initial stages, we have observed an improvement in overall productivity. There are faster order deliveries and less backlogs.”

The Mazak iSMART FactoryTM project is being rolled out in five phases towards a target of man-hour savings of 30 per cent within three years.

Victor Lim (pictured), 25, who was promoted to senior engineer last year to take on a bigger role as Mazak iSMART FactoryTM project leader is glad that his job has now progressed beyond troubleshooting at work.

One of the smart factory solutions used in-house and offered to YMS’ clients allow companies to monitor overall equipment effectiveness through a state-of-the-art dashboard.

“Before using the software, we solved the problem after it happens. Now, we can take preventive actions immediately without waiting for someone to inform us,” said Victor.

According to Metal Industries Workers’ Union (MIWU), the company has been working closely with them to better the lives and jobs of the workers.

“Together, we’ve been through various company transformations, from automation to becoming a Cyber Factory to today’s Mazak iSMART FactoryTM. We also tapped on the Skills Programme for Upgrading and Resilience and extended the scope to represent research & development, engineering and sales employees. The MIWU Plaque of Commendation was awarded to YMS in 2013 in recognition of their efforts to take care of their employees.”